How to Kick People off Your WiFi

Shared your WiFi password with someone? Too many family members using your home WiFi internet resulting in a slow internet and constant lag while gaming? Here we will learn why and how to kick people off your WiFi network.

Reasons why you would want to kick people off your WiFi

In all the above situations, it’s much more efficient and easier to just kick people off your WiFi network rather than asking them to remove themselves.

One method all websites recommend is by changing the WiFi password of your router. But then, this will disconnect all the other connected devices including your phone and laptop. If you don’t want to go through the pain of re-entering the new password on all connected devices again, here are a couple of ways to boot people off your network.

Kick People off your WiFi Network on Windows 10

We are going to use a free app called NetCut. It is an older project but works fine on Windows 10. The UI is straight out of the 90s though. Download and install NetCut from its official website. You might be asked to install another program called WinpCap during the process. Just follow the installation wizard and you are good to go for it. Reboot your computer if asked.

NetCut will list all the devices currently connected to your WiFi network with their Mac addresses. Select the Mac address you want to block and click on the ‘Cut’ button. This will disconnect the internet from the target device. Click on the ‘On’ button to allow reconnecting to your network. 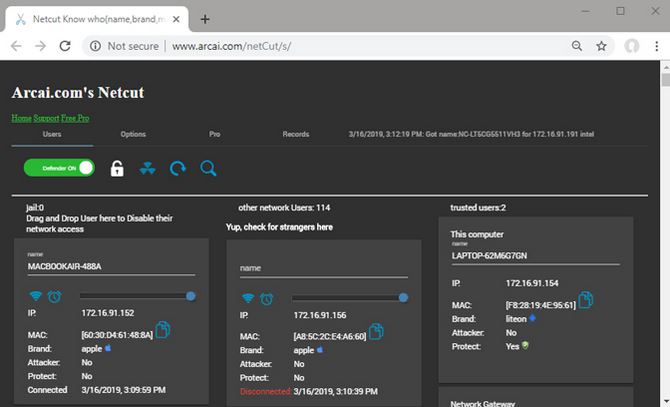 When you start the NetCut app, it spoofs the Mac address of the router and makes the moocher’s device believe that it is the original router. Now, the victim’s device starts sending all the data packets to your device (that is running NetCut). Instead of forwarding data packets to the router, NetCut will drop the packets resulting in internet disconnection.

How to Kick People off Your WiFi on Mac

JamWiFi is the Mac app that will let you kick people off your WiFi network. For obvious reason, it is not available in the App Store to download directly. Download and install using the link below. Depending on your security settings, you may not be able to launch the app. To fix that, go to your System Preference > Security and Privacy > Allow apps download from > and then allow JamWiFi.

Once the app opens, click the scan button at the bottom to scan all the WiFi networks around you. Select the network you want to block. It’ll show you a list of Mac addresses on the WiFi. Select the one you want to block and click on ‘deauth’ button at the bottom. This action will disconnect the internet from the victim’s device and your computer too. 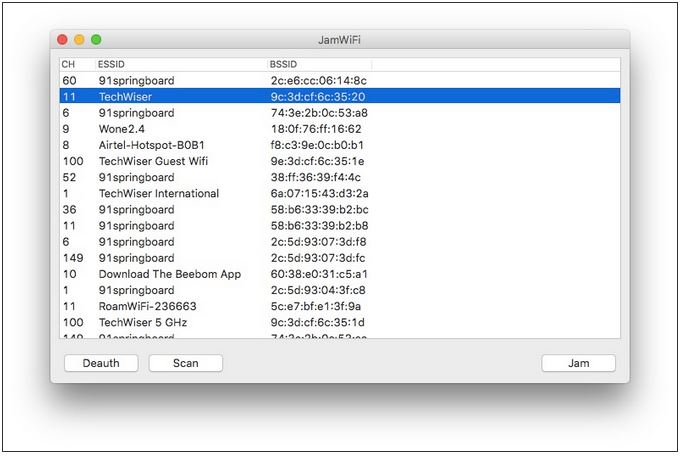 The way JamWiFiworks is different from how NetCut application works. Instead of acting as a router, it sends continuous de-authentication packets to the victim’s computer. So, every time the victim’s device wants to connect to the network, JamWiFi will send a deauth packet to disconnect it.

How to Kick People off Your WiFi on Android

When it comes to Android, there are many apps that can kill the internet of other devices on the network. Some of those apps include but not limited to WiFi Kill, cSpolit, etc. We contacted the developer of Netcut, and this is what he told us:

In almost all these apps, one thing that is common is that they require root access. If your Android phone is not rooted, you simply cannot use any of these apps. We recommend NetCut who also developed the Windows version and yes, it needs root access too. Download the app from Play Store, launch it, and give root permission when asked for. Search for the device you want to kick off your network.

Click on the red WiFi symbol next to the device which will disable the internet on that device. You can also move the slider appearing in the middle to alter the speed of the connection. 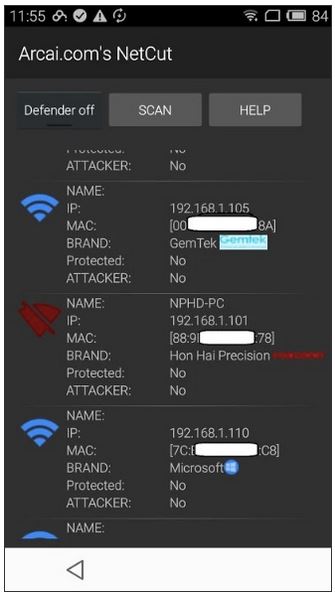 Alternatively, you can also use WiFi Kill

Also read: 5 Awesome WiFi Hacking Gadgets to own any Network

How to Kick People off Your WiFi on Router

Login to your router and look for DHCP settings. Some routers have the option to disconnect devices directly from their mobile app. However, if your router does not have this option, you’ll have to do it manually.

Every router configuration is very much dependent on the manufacturer. So, to kick people off your WiFi network by disconnecting the offending device via DHCP server or to bind IP and Mac addresses, you need to consult your router manual. The process is usually easy to follow.

Alternatively, you can also call your ISP and tell them that someone is using your WiFi without your permission. Most routers have a remote access feature where the ISP can log into your router and find out the WiFi moocher. By default, the remote access feature is disabled on most routers. But you can easily enable it with just a few clicks. Again, the way to enable or disable remote access is different on every router. So, consult the manual.

That being said, as good as the remote access feature is, it is also scary. Imagine a person sitting 1000 miles away from you, logging into your router any time he wants. This is why we recommend WiFi security features like changing your default WiFi password, disabling remote access when not using, etc.

Wrapping Up: Kick Someone off Your WiFi Network

So, there you have it. These were some of the ways to disconnect other users from your Wi-Fi Network. The best way is to use dedicated apps such as Netcut for Windows and Android or JamWiFi for Mac. Now you can play games lag FREE!